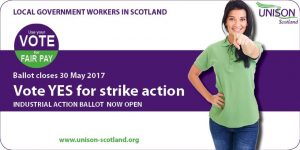 If you haven’t voted in the Pay Ballot make sure that you post your Ballot paper tomorrow. UNISON recommends that you vote YES for Strike Action.

Your pay is worth far less now than ten years ago after years of pay restraint and inflation.

Local government workers are seeing their living standards squeezed as the prices of food, gas and electricity, travel and childcare continue to rise. This can not continue – you deserve more. You deserve fair pay.

While inflation indexes show how costs are rising, the impact on individual households is often worse. This cannot continue.

The employers have offered:

• Scottish Local Government Living Wage is the minimum pay for all pay and allowances including additional hours, contractual overtime and other allowances. It will be pensionable.

The employers’ offer falls far short of our claim. We asked for:

• The continued uprating of the Scottish Local Government Living Wage.

• A future pay strategy to identify and redress the imbalance caused by previous pay awards below the rate of inflation.

Am I being asked to strike?

Yes. This is a formal industrial action ballot. The consultative ballot that you previously took part in returned a very firm rejection of the employers offer.

This will be determined by UNISON’s Scottish Local Government Committee later this month however it is likely that any programme of action will commence with a single day of action for all members.