Unison Inverclyde are supporting Unison Scotland’s ‘Local Government ONE Team’ campaign for fair pay that we all deserve fair pay in local government. 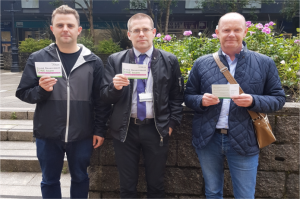 Local Government: It’s ONE Team’ – Next steps of the campaign

Whilst COSLA have been consistent in their agreement with us about the need to uphold the principle of parity across the local government bargaining groups we need to give power to their elbow in their discussions with the Scottish Government and remind them that we will not give up on this.

It has therefore agreed to extend the campaign to the whole of the Local Government membership. The postcards worked so well with our members in education that it has been agreed we should do a similar exercise with the wider membership. To this end we have a new postcard which we are asking all members to send to the President of COSLA in advance of the next meeting of COSLA Leaders on the 31st August.

Any improvement to the pay offer would have to be put to, and signed off at, this meeting so the intention is to ensure they know members strength of feeling before any decisions are taken.