Have you ever given much thought about how your pension fund is invested?

Did you know that compared to the other Scottish Local Government Pension Funds, Strathclyde Pension Fund is the biggest investor in fossil fuels? Yes they can argue that they also invest in renewable energy and social housing, but not enough.

Friends of the Earth Scotland compiled figures in 2016 which showed the amount of investment by each Scottish Fund: 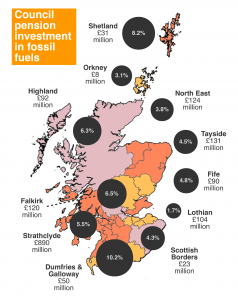 The Governor of the Bank of England has warned recently that the vast majority of fossil fuel reserves are unburnable if climate change is to be limited to safe levels as pledged by the world’s governments.

Some investors are taking bold action to limit climate change and the risks it brings by divesting from fossil fuels and reinvesting in sustainable projects. Eight universities and churches in Scotland have made a commitment to cut their investments in fossil fuels along with five pension fund elsewhere in the UK.

In fact the majority have never even discussed climate change and the risks it poses to the funds. Those who have, have done little to change what they invest in instead falling back on the practice of ‘engagement’ – persuading fossil fuel companies to transition to renewable energy, an approach to climate risk which has been widely debunked.

Only a handful of the largest funds have dedicated resources and expertise for investing in infrastructure, but that’s still not enough.

The continuation of fossil fuel use at current levels is contributing to the rise in global temperatures and devastating climate change. It is accepted by governments and scientists that measures are necessary to reduce fossil fuel use to avoid global temperatures rising by 2 degrees, and preferable 1.5 degrees, above pre-industrial levels. This effectively means that most known reserves of fossil fuels should be left in the ground and alternative methods of generating energy must be prioritised. So what happens to the investment that has been made with our Pensions fund?

Unison Scotland is asking members to make a stand and lobby the Pension Fund Committee and Councillors to find an alternative cleaner, greener way of investing what is, at the end of the day, your money.

Have your say: email or write to the Chair of the Pension Committee.