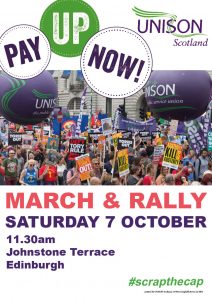 There is a rally against the public sector pay cap which will be held in Edinburgh on the 7th October.

If members from Inverclyde wish to attend can you e-mail the branch office on unison@inverclyde.gov.uk or phone 715900 so transport can be arranged.

For years now public service workers have seen their pay held back by government in the name of austerity. First a freeze then a cap, resulting in public sector pay, across the UK, rising by just 4.4% between 2010 and 2016 while the cost of living rose by 22%.

That’s no way to treat hardworking people who play such a vital role in looking after us and holding our communities together – keeping us safe, healthy, educated, and cared for.

Governments, both in Scotland and UK, are now under real pressure to scrap the 1% cap on public sector wages and UNISON is leading the fight to get you the pay rise you deserve.

And more and more people are listening and supporting our Pay Up Now! campaign.

Now it’s up to us, in UNISON, to keep that pressure on until we get:

We can’t miss this opportunity. They won’t pay up if we don’t speak up. So, please get involved in our campaign and help us win by keeping the pressure on to scrap the Cap!