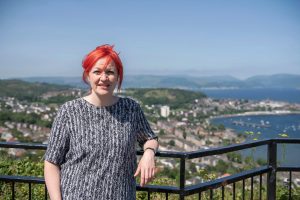 “It was called the ‘Beast from the East’, the cold and wintry weather conditions that arrived in Inverclyde at the end of February 2018 and covered our roads and homes in a deep, deep snow. Against a dramatic backdrop of extreme weather, there was one group of people that remained highly visible throughout: care workers. Like me, you will remember seeing people – mostly women – battling against the snow to look after the most vulnerable members of our society.

Care workers tried to do the same again during Covid-19, to give everything within their powers to look after the people who need it most. These workers have been at the frontline of the pandemic and UNISON has been right there with them, calling out the lack of appropriate PPE and highlighting concerns about low pay and insecure contracts.

Many UNISON members will have first-hand experience of the impact of the pandemic on our care homes with more than 2000 deaths in Scottish care homes linked to Covid-19. BBC’s Disclosure has investigated how homes in Scotland have been affected by the pandemic. Questionable and heart-breaking decisions were taken at national level and we all need answers to explain why carers, residents and their families have been so badly let down.

Richard Leonard, Scottish Labour leader, has been leading calls for a Covid-19 public inquiry to include a consideration of whether the human rights of care home residents have been breached, back by the Scottish Human Rights Commission. Since 2011, Scottish Labour has been demanding a National Care Service and we will push into next year’s Scottish Parliament elections with this at the heart of our campaign. Just imagine what sort of improvements could be made for care in our country with politicians who focus on health, jobs and education instead of independence and the constitution.“