As UNISON Scotland launches a formal targeted ballot on strike action, join UNISON for a live streamed pay rally as we lead the fight for Local Government pay. 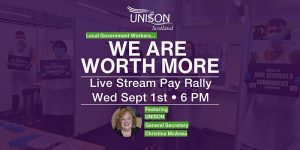 UNISON Scotland is leading the fight for fair pay for all local government workers. From 1st September we will move to conducting a formal industrial action ballot of select groups of workers including members working in school cleaning, school catering, school janitorial as well as those working in waste and recycling services.

Join us at 6pm on Wednesday September 1st for a live streamed pay rally with UNISON General Secretary Christina McAnea.

UNISON members are worth more!